News from the farm:

We are entering the budbreak time of year on our little farm in the Cascade foothills, and are “watching the grass grow” as the trees and vines prepare to bud out.  Where we are, that old expression takes on a whole new meaning.  As one enters Linn County, on Interstate 5 there is a large road sign that says “Welcome to Linn County – Grass Seed Capital of the World”.  They are not kidding.  There are many large grass seed farms here, representing over half of the use of cropland in the Willamette Valley.

Back in our native New England, grass was fairly easy to control with edging and weeding, and winter helped keep it in check.  Here?  It needs a whip and chair, and a lot of work to keep it back from where it is not wanted.  Mowing starts in late winter on drier days, and will stop for a while when the skies clear, and the grass turns brown as the hot and rainless summer takes over.  Garden maintenance will keep us busy, and the local markets will be full of fresh produce.  One of our local farmers, who is also a science fiction fan, had a matted print of Gourdzilla proudly displayed on her table at market last year.  Anyone who has ever grown zucchini, and discovered it is very prolific and can be hard to even give away, might enjoy this print by Alan Beck:

It also reflects how I view my own ability to keep the grass here under control. Totally inadequate, and keeps me running…

So what else is new here this month?  If you have ever seen any episodes of Ray Bradbury Theater, you may recall the intro where Bradbury is seated at his typewriter in his office, surrounded by all kinds of interesting objects collected during his life.  He scans the room, looking for something to catch his eye, and his imagination, and then begins to type.   Here on Salmon Brook Farm, between the all too numerous gopher mounds, assorted critters wandering through, family, friends and travels, I can find plenty of material to get a newsletter started.  The newsletter itself has changed radically over the years.  Its roots started in Connecticut, beginning with just a brief list of gigs, and later grew into to sporadic reports on the list of upcoming gigs, and what was in season on our farm here in Oregon.  I took over writing them in 2007 when Rick tired of the task.  The content and scope continued to change as I worked at finding a way to verbally paint in email what we saw, and what life out here was like to people back east.  It finally became a blog in 2013 when Rick retired from playing music, and I tired of keeping an email list.  With some encouraging feedback on content from readers of the email newsletters, I dove into the murky, unknown realm of blogging, figuring this might be a good place to archive the writings, and readers beyond the realm of the old mailing list could help themselves.  A few photos would augment the archives, filling in the cracks.  Old Klaatu had passed away in May of 2013, and I wanted to tell the story of this unusual feline that wandered into our lives, a memorial of sorts to that wild, elusive spirit of his.  Thus was born salmonbrookfarms.wordpress.com in June of 2013.  It is still evolving, a work in progress.  Learning as I go!  Writing, or even playing music, for me is like working with a unruly or skittish horse – sometimes rears, bucks or outright throws me, sometimes stops dead in front of a gate and I go sailing head over heels, reins still in hand, crashing on the other side – but it is always an interesting ride of discovery.  When the two finally do manage to work together, the ride is smooth and synchronous.  Horse and rider both feel the rhythmic connectivity, understand each other, and move as one over the terrain.  I feel nothing but joy.

So, while things are budding out and getting underway this month, we will emerge from our Gopher Hole of tales from about the farm, and tell the story of a goat.  Not just any goat, but one that could have come straight from the imagination of Ray Bradbury or Rod Serling.  We encountered this very unusual animal during one of our travels up to Washington in 2005.  Ladies and Gentlemen, I present to you the story of Thelonious Goat.

Saddle up a trusty vehicle and go north up the Willamette Valley to Portland, Oregon.  Turn east along the Columbia River, where  the vegetation transitions from the lush greens, and lichen dripping Ent-like trees of home into much drier grasslands and sagebrush of land in the rainshadow of the Cascades.  Sculpted by the Great Missoula Floods, the region bakes in summer and freezes hard in winter.  From Route 84 on the Oregon side, the hillsides over in Washington appear to have a strange velvety texture, and look like giant tan-colored lion paws where they come down to meet the mighty Columbia as it rolls on by.  Cross the river around Hermiston and head on up to the Tri-Cities area, or perhaps further on to Spokane and points east.

We were staying with a very gracious couple that put us up during the Tumbleweed Music Festival in Richland, Washington that particular weekend.  The four of us were sitting on the front porch in late afternoon, enjoying good company and conversation, when we heard the sound of hooves coming up the driveway from the road below.  Much to everyone’s surprise, a lone billy goat appeared.  He appeared to be familiar with the place, like he owned it, coming right up onto the porch!  Our hosts were perplexed, never having seen this goat before, and not knowing of any farms with such animals in the immediate area.  His lower jaw appeared to be deformed, or had been broken at some point and healed in a strange position.  The jaw, coupled with his wild-eyed goaty stare, gave our horned visitor a slightly demented look that was both alarming and endearing to behold.   Being an intact male, he stank, adding the dimension of ripe male goat odor to his persona.  He laid down by my feet, like a dog, joining the group as if he had stopped by for afternoon tea with friends.  Not wanting to keep referring to our strange, stinky visitor as “The Goat”, I thought he should have a proper name for the evening. “Thelonious” came to mind, and it stuck.  Strangely enough, the goat responded to it as if it were his own name.  Our hosts’ full-grown Airedale Terrier was not pleased, however, at the goat’s intrusion onto his property, and rushed at Thelonious, barking furiously.  Undeterred, the goat calmly leveled an evil-eye at his assailant, backed up a few steps, and gave the dog a swift ramming with his horns.  This sent the Airedale packing behind his owners chair, whimpering curses from a safe position.  Goat “1”, Airedale “0”, Thelonious settled back into a comfortable position and rejoined the party. 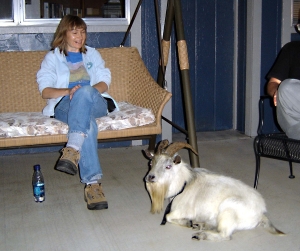 After a bit, our hosts took us on a tour of their property, thinking the uninvited horned guest might leave of his own accord.  Instead, the goat joined us for the tour, sticking close to me.   We all went in for dinner after the tour, leaving Thelonious to his own devices on the porch for the evening.  Our mysterious visitor was gone by morning, disappearing into the night without a trace.  Why he came to visit us, and where he came from will forever remain unknown.  In mind’s eye, however, I picture his departure ending like a Twilight Zone episode:

“The day, with all it strange events, has ended.  The house is now dark, the inhabitants sleeping.  Outside, an unusual goat quietly scans the heavens, perhaps looking for a sign among the myriad stars that span the sky.  A light breeze stirs the darkness, and a thick mist slowly creeps into the lower end of the driveway, down past the gate posts through which he had arrived earlier that day.  Nostrils quivering, his ears turn in the direction of a voice.  A voice calling from somewhere beyond sight, from somewhere beyond the writhing fog.  Eager with anticipation, he rises, disappearing into the beckoning misty tendrils that await him.  He has answered a call to return home.   A call that could only have come from…the Twilight Zone.”

I’ve continued to expand and rearrange the sub-pages under music.  The full listing of songs on the CD, the stories behind why some were written, or chosen to cover, are now there.  Help yourself!

In your area, wherever you may be, please do all you can to help keep your own local music alive. Go out and see someone you don’t know, host a house concert, download songs or buy CDs. Or even just stop for a minute to hear someone at a Farmers’ Market. Live, local musicians provide a wealth of talent most people will never hear about in this age of iPods, Internet and TV.