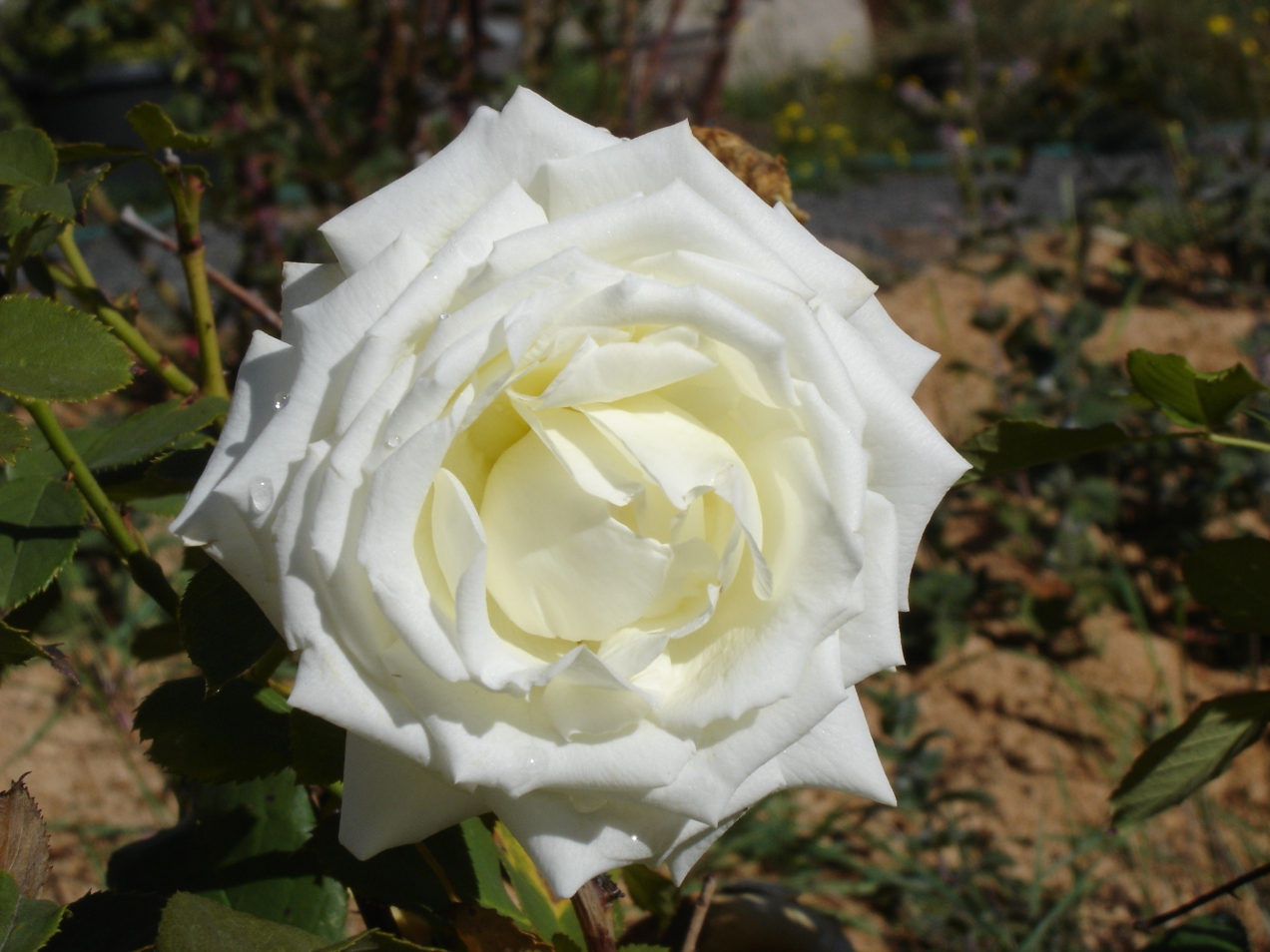 Our feature photo this month is of our only white rose, which was planted in memory of my own mother some years ago.  White flowers were always her favorite, although the white peony planted by side door of the house where my earliest memories go back to was her real treasure.  In the absence of a white peony to be found at the time, a white rose down at the local feed store and garden center caught my attention, and begged to be taken home to fill this role.  This particular rose struggled in several different locations, but has finally decided to thrive in the current placement in the rose bed near the house.  My mother would be pleased.  The rose rewarded us for our patience with many fine blooms this year.

The blazing heat of summer has finally left our little farm in the Cascade foot hills, and we have even had a little rain, as well as a light frost one morning.  Our days have mostly been warm, ranging from the 60s into the low 80s.  Herds of heavy blue-grey to stark white clouds wander through October’s blue skies on their way up and over the Cascade Range, drinking along route from the rivers of rising morning mists.  The silvery-grey mists of dawn transform to pink and gold, and finally to day-white, and float away as the temperature rises and the morning unfolds. The air has a slight nip, which can be felt as these behemoths pass overhead, temporarily blocking the golden warmth of the afternoon.  The moon is in the growing phase again, and I have been noting its familiar crescent form in the western sky in the evenings.  The combined silhouette of the dark zone and the bright crescent give the impression of a large eye, focused on and observing the greater universe.  I look forward to seeing this moon-eye at the beginning and end of every lunar cycle.

The old female persimmon tree, festooned with many small fruits that are slowly turning orange. The make tree companion is almost bare of leaves at this time, and just visible in the right of the photograph.

Bees and birds got to the entire pinot vineyard before I was able to harvest, so this year’s experiments making wine and vinegar were a total failure.  The drought was hard on all creatures, and with little forage or water to be found, attention turned to any unprotected crops of interest, and sugary grapes were no exception.  Honeybees, and yellow jackets can get through bird netting, although I also found some enterprising youngster raccoons slipping in under netting at night!

Most of the pinot vines have already dropped their leaves. The table grape leaves are still ranging in color from green though gold.

At this time, dandelions are mainly what the area honeybees bees can be found feeding upon, as well as any fallen apples with exposed flesh. 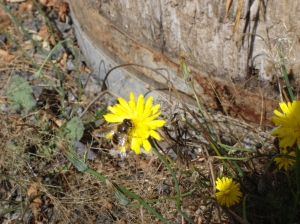 California poppies are still blooming, now that they have recovered from the summer heat.

Honeybee feeding on a different type of dandelion, Taraxacum officinale, the Common Dandelion. Both kinds provide vital pollen and nectar for bees.

Rick has been busy converting this year’s tomato harvest, fortunately not coveted by birds and bees, into sauce which I am busy canning.  Hot peppers will be dried into long strings, and will heat up many a winter dish.  A mystery squash plant which came up from a volunteer turned out to be quite good, and many of its numerous golden hard-shell torpedo-shaped fruits are stored in racks for the winter.  It takes a meat cleaver and a mallet to cut open the shell of these golden delicacies, but baked at 350 with salt, pepper and a bit of olive oil, they are quite good, and make their own baking dish/soup bowl for other ingredients which can be added to the cavity once the seeds are removed.

The bounty of the garden.

Rick preparing crushed tomatoes for canning. We will put away close to 70 quarts this season.

Our feline correspondent this month is Mr. Marcus, at 8 years old, the youngest of the Boys of Salmon Brook Farms.

News of Jaws, the newest rough and tough gopher in town, has reached the boys, and they are not sure what to do about him!  Mr. Nano told Marcus he will keep watch out the back window, while Lucio said napping is a much better idea, and anyway, isn’t it someone else’s job? Marcus is not sure he is up for such a daunting task, catching a gopher who can tunnel down through hard-packed gravel!

Lucio – getting comfortable is such hard work!

Lucio – prefers to curl cup in his cushion rather than chase gophers.

Nano the Great White Hunter – remembers the days when he used to live outside and would catch, and eat, 5 or 6 gophers in a day when he was a wild feral cat. Been injured on the job. Came inside to be my guardian. Thinks we should call Mr. Bowie, The Great Grey Hunter to take care of Jaws. Mr. Bowie can be found at :https://hopedog.wordpress.com/

This is an area of driveway where I previously had to use a pickaxe  to dig a drainage trench, a testament to the power of these rodents.  A good nap in the old leather chair sounds much safer. Old Jaws has been tunneling around the old well house, making quite a mess of things.  Rick thought perhaps Odd Job might have been a better name for this particular rodent.  I have watched various cats hunt these pocket gophers, and have noted the successful captures occurred when the cat patiently watched the hole for hours.  One would eventually see the cat initiate a sudden vertical liftoff several feet off the ground, quickly coming down directly on the gopher which had just emerged from the hole.  The feline hunter must be careful not to miss the quarry upon landing.  A failed attempt can result in bodily injury when the gopher strikes back with sharp teeth that can easily cut through roots.  Gophers are a Force of Nature.

It Came from The Gopher Hole – hideout of Jaws-Odd Job the Gopher. He means business!

View of gopher hole from further away. Why this fellow tunneled through thick gravel when he wasn’t far from dirt is a mystery. Intimidation, perhaps?

Old Seabisquit the Subaru is waiting for some autumn maintenance from me, and may have something to say next month.  This Wednesday morning, Seabisquit and I take Willow, the Calico matriarch, down to the vet for a dentistry.

Willow, Calico matriarch. Does not like the idea of an upcoming tooth extraction, although she understands it is necessary. She will have something to say about that!

Music news (schedule posted on the Performance Schedule page)
I have now finished up playing out for the season so I can rest up, refresh, recharge and get a few things done here on the farm that will take up a considerable amount of my time and energy.  Thank you to all who came to see me perform or took a minute to listen in 2015.  I will be resuming playing out again in January or February of 2016, and look forward to seeing you all again!  In the meantime, please – wherever you are – help keep your own local music scene alive by going out to see live performers, of any genre you prefer.
In your area, wherever you may be, please do all you can to help keep your own local music alive. Go out and see someone you don’t know, host a house concert, download songs or buy CDs. Or even just stop for a minute to hear someone at a Farmers’ Market. Live, local musicians provide a wealth of talent most people will never hear about in this age of iPods, Internet and TV.

A beautiful sunrise over Salmon Brook Farms, a reminder every new day is a gift to cherish. Each day is unique, a new opportunity. Choose wisely.