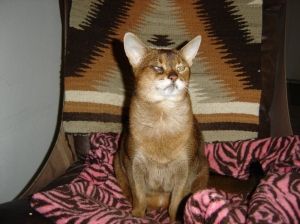 Abby, taken back in February of 2019, a commanding presence in her favorite chair. She was always on the move, and difficult to photograph unless she was sleeping or eating. Take too long, and one would be guaranteed a good picture of her nostrils in the lens.

There comes a time when the body is too worn and tired to continue, and the spirit longs for freedom from it.   Abby had a good long run with us, and at 18 1/2, she had run out time.  Since March we had noted she was losing a little weight, and some muscle mass, although that only slowed her down a bit.    Although she was never overweight, she had always been a good eater, even when she was down to two teeth, her upper canines, by the end.  Those upper canines were also used to get attention, and Abby would bite the top of my head with those sharp teeth at night if I was asleep and she wanted petting.   Rick and I used to joke about her having a hollow leg to hold all that food, and I would say when the day comes she stops eating, she is probably done for.

We noticed she was not so interested in her food for the last few weeks of her life.  A trip to the vet revealed high blood glucose that was spilling into her urine.  Abby’s urine had been fine in March, her last checkup.  She was fitted with a sensor and calibrated reader, and started on one unit of Lantus glargine insulin twice daily on September 4th.  Her kidney function was deemed good for a cat that age, and staff remarked how beautiful she was and how sleek her coat was.

Her interest in food continued to go down, although her attitude was good, and she still greeted people with a purr and inquisitive paw.   Her glucose took some wide swings, and she was brought back for observation and recommendations a few days later.  On the 10th, I checked her at 4:00 AM, her glucose was reasonable, and she was awake and sitting up in her basket, so I went back to sleep for a little while until it was feeding time.  I found her immobile, unable to lift her head, under the entertainment center, but still purring and happy to see me.  She went back in immediately on emergency.  The emergency vet indicated Abby’s glucose was fine, but she had palpated a mass along the GI tract.  She asked us what we wanted to do.   The Oregon wildfires were in full swing at the time, and we were situated in a Level 1 evacuation area, with a Level 3 about 10 minutes down the road.  Given her age, a probable tumor, diabetes and possible evacuation to unknown facilities that would accept 8 cats along with us, the decision was made to let her go peacefully.   Euthanasia has never an easy decision for me.  Never will be.

It is here I will close my own thoughts, and leave readers with an eloquent note I received from Kerm Jensen, an old friend and long-time mentor, back in 2015 when Rick’s mother passed away.   This note from our friend still brings us great comfort.

“I join you in your sorrow and joy.  I am aware that getting old is mostly a matter of letting things go, giving up many thoughts and dreams that we compile during our lives.  I have come to believe a page from the Buddhist philosophy, dependency arising.  All things are connected to all things.  Nothing happens without a ripple through the universe whether we are able to perceive it or not.

I also believe it has been a blessing that she was surrounded by the cats and the farm, all the things that speak of life with their cycles and acceptance of all that happens.  A few days ago I had a five minute stare down with a four point buck and several does.  He was a little curious but very separate with his little family.  He was also fearless and accepting of our sharing a space and time.  Eventually he went back to eating and I went along my way.  The does weren’t concerned in the slightest.

There’s nothing special in that five minutes except that we are all here, we all have our part to play and then we go forward to whatever dimension is next.  The rest of us remain with our memories, selecting out the good and mostly letting the rest fade away.  While I’m in no hurry, to me Death is a friend whom I’ll have plenty of time to get to know in the future.  I’m watching the seasons come and go with more intensity than ever before.

You and Rick have come through a very difficult time that has increased the wear and tear on both you.  You are changed by it as we all are by every difficulty that comes our way.  Now is the time to sit back quietly for a short while and cement the good while letting the bad find it’s own way down the road.  I admire your strength and fortitude tremendously, both of you.  I want you to finish out this winter and walk into spring with all of its new promise.  I hope you will find renewed happiness in the renewed season.    – Kerm.  December, 2015” 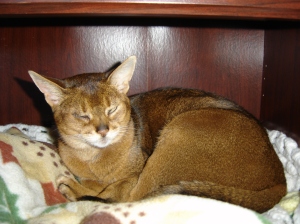 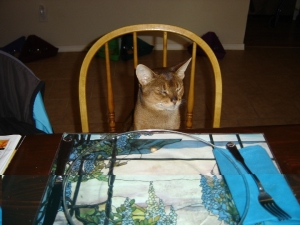 We love you, Abby, and will miss you.