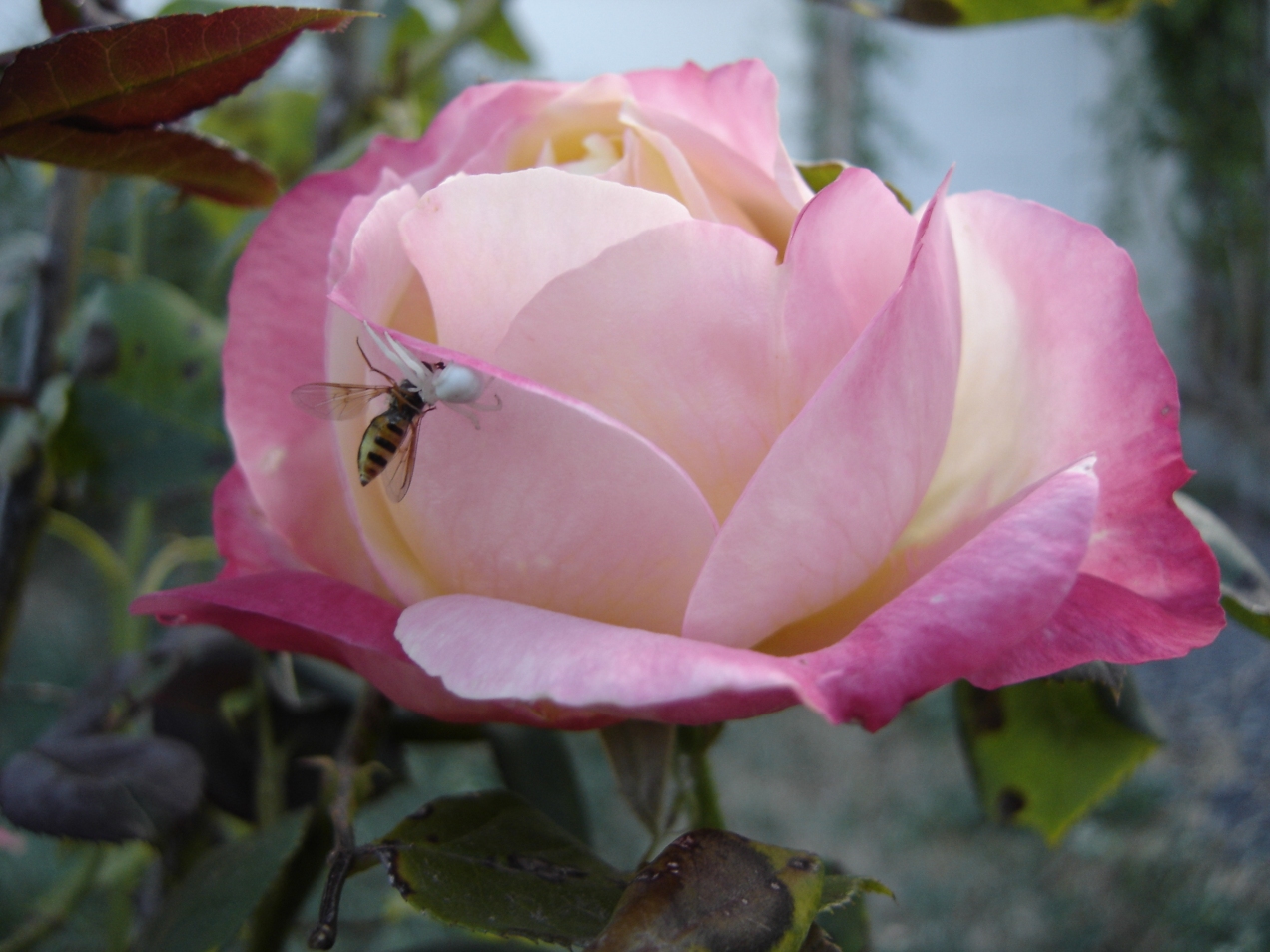 Our feature photo  for August is of a resident crab spider that has ambushed an unwary visitor to this lovely rose.   I have often found these spiders inhabiting floral truck stops in the gardens, waylaying assorted pollinators that have come seeking refreshment, and sometimes a place to spend the night, amid the beautiful but potentially deadly blooms.

An unwary visitor has been captured by this flower’s resident crab sider.

The air has been hazy with dust from agriculture, and smoke from field burning and distant fires.  There is little to no rain, and what seems like endless days in the 90s.   Rooted in place, trees, shrubs and other plant life stoically wait out the dry season, the only indication of their stress noted in their dry, drooping leaves.    We spot water the most needy, conserving water and well pump.

We have four young pinot meunier vines that were given to us. They came from a heritage block up around Newberg, Oregon. A place has been found in the vineyard to grow these youngsters who will require water until they are established.

August is the primary month to view dust devils, those carefree vortices seen spinning lazily across farmland after grass seed, wheat and straw have been harvested in Oregon’s Willamette Valley.  Impressively large machines harvest, plow and pulverize the soil, sending the dust of Oregon swirling up into the atmosphere until early summer’s azure blue has taken on tones of tan and grey.   The clarity of light noted earlier this summer is now gone, and will not return for some time.  As this month of heat and dust comes to a close, we are grateful for this year’s bounty of fruit and vegetables, and anxiously wait for the grape harvest and this year’s wine.

Pinot noir before covering with insect netting. It is a heavy yellow jacket year here.

Insect netting was quite effective last year, and worth the investment.

We have a short row of Early Muscat and Gewürztraminer. The grapes shown here are Early Muscat.

It is cooling down sooner in the evenings now as the last light fades and the stellar community reveals itself, as a symphony of stridulators performs in the growing darkness.  The rising veil of night in the east comes earlier;  the calendar shows we are only about three weeks now from autumnal equinox. 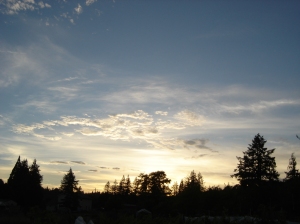 Sunset on the 29th of August. 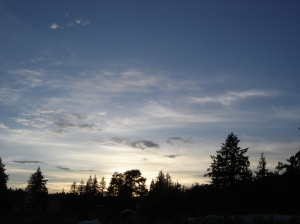 A week earlier, I saw one of our grey foxes one evening when I was finishing up watering the garden. A sleek healthy fox had flushed a dove, and was chasing it down past the garden where I stood not 50 feet away. The fox was not quick enough, and the bird escaped the jaws of death yet another day. Looking longingly after a lost meal, our fox sat down, unaware of my presence, turning to look at me only when I called to him. He moved only when I went out the gate, disappearing back into the woodland, long brushy tail streaming out behind.

We have been enjoying eating fresh plums and apples right off the trees these days, as well as blackberries, raspberries and tomatoes.  We are grateful for all that we have, and consider ourselves very lucky to be here on this farm.  Life is good. 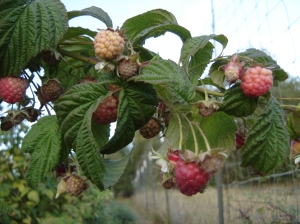 Resident feline correspondent and head of the local correspondents desk Mr. Nano is still on vacation this month, sleeping off the summer heat and enjoying the breezes coming in the window.  Miss Wynken of the Three Sisters will file another report in his absence.  She has chosen a few excerpts from her daily logs for August, 2018. Without further ado, Miss Wynken will present her report.

Correspondent Miss Wynken gathering news from one of her many window stations. 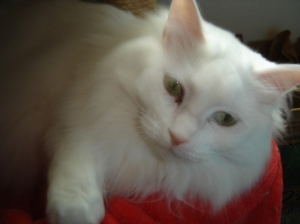 Correspondent Miss Wynken contemplating her report. “What do I tell our readers?”

Saturday, August 4, 2018: A breeze sprung up in mid morning, and a front appears to be coming in from the south. A long swath of altocumulus and cirrus, a clear zone, and then another band of interesting development, including some kind of cumulus convection cell that grew in the shape of chanterelle mushrooms. Flared tubes with delicately gilled throats, rising up and capping off in a frilled top, were a reminder that mushroom season will be here again in a few months.  I see these unusual cloud forms from time to time. The waning moon in last quarter, white with faint grey marbling like sea-tumbled quartz, was sailing west on an intensely blue river of sky between the swaths of frontal cloud.

Sunday, August 12, 2018: 52 and mostly cloudy at daybreak, which opened up soon enough into mostly clear skies,a pleasant breeze and a high somewhere in the low to mid 80s. I watched a squirrel come barreling down the driveway, followed closely by a blue jay who was pecking the squirrel’s behind. The windows stayed open until the late afternoon sun heated the house up; the arrival of dinner guests who had been traveling in a hot car were pleased to come into a cool place. It was a day busy end to end with small things.  By post-sundown, a patch of hazy clouds to the southwest had grown, and more had flocculated in the direction of the setting sun. A partly clear night in progress here as another day has slipped though my paws like sand.

Tuesday, August 14, 2018:  A pleasant 52 degrees under hazy skies at daybreak. It was extremely hazy but not humid today. I did not smell smoke today or this evening, yet it looks smoky; the dark forms of conifers on the surrounding hills appear as if through a veil.  I am becoming used to heat in the 90s, perhaps because the daylight hours are shrinking and the heat does not build for quite as long.

Another orange-red sundown this evening. It is still near 80 out there at this time as another day comes to a close, and the stridulating insects of late summer play their symphonies out there as the daylight fades and the cooler realm of night rises up from the east.

Thursday August 16, 2018:  Small birds perched sideways on lemon balm stalks collected seed. I noted a brief interaction between a goldfinch and a hummingbird, the surprised goldfinch getting out of the way of the hummingbird.

A summer night in progress, complete with August’s nightly symphony of insects, signaling September is not far off. A waxing orange-red crescent moon sails across a smoky sea. Even the bright planets appear reddish, and far fewer stars are visible through the haze.

Tuesday August 21, 2018:  Another orange sunrise, hazy morning down in the low 50s, rising into the mid 90s by mid afternoon. A warm breeze blew most of today, with a pensive, wandering feel to it; its path revealed in the rustling of leaves, shrubs and dry grass . Everything is so dry, waiting for rain that will be a while in coming.

Saturday August 25, 2018: A variable cloudy day, rising into the mid 70s by afternoon. The feeling is more autumn-like out there, and it is easy to envision first frost within a month. The bright orange, golds and reds of New England do not grace the hills here. Tired, drought-stricken leaves slowly turn a faded yellow and brown, quietly slipping away with the daylight hours. The rains and winds will come, stripping the remaining leaves off the branches.

Sunday August 26, 2018:  The earth is damp this morning; dew covered webs of ground nesting spiders cover the yard in a silver gossamer patchwork. A light breeze gently ripples through trees and vegetation, a whispered prayer for rain.

Monday August 27, 2018:  I awoke just after 7:00 AM to overcast conditions. A relatively warm 57 degrees; all was wetted down from a very light rain sometime during the night, not enough to really do much good except keep down the dust and bring an arachnid Brigadoon into view. A rain-drenched city of spider webs, particularly the ground spider webs that resemble tiny faerie trampolines, was now visible. Eventually they will all fade from view in the heat of the day, concealed until the next damp window of visibility.

We wish our readers a pleasant evening ahead, and safe travels to all wherever their destination in life may lead them.

Bright sunset clouds on August 29th. Nature’s most beautiful skyscapes, and wildlife, can be seen at the bookends of the day.

On our way over to a show in Yachats, on the westbound side of Route 34 we passed a small wooden sign with red letters which read, “PIE 3.14 miles”.  Unfortunately, there was no good place to stop on that side of the narrow road, which winds its way through a sparsely populated section of the Coast Range, and take a photo.  We did pass a real pie shop out in the wilds further down, and figured there must be a sign somewhere on the eastbound side about 3 miles down.  Sure enough, we did see one, managed to turn around without getting ourselves killed, and got the photo below.  Some mischievous soul had added  “.1427” after the “3”.   My brother the mathematician informed me that the sign was incorrect, and that the decimal expansion of pi is approximately 3.14159265. 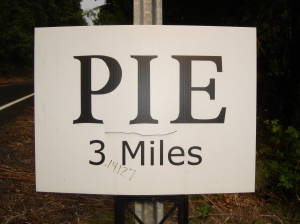 There really was a pie shop down the road, although we are not sure of the exact mileage. Click on photo to enlarge.

If you are in the area and wish to see me play live, please visit the Performance Schedule page in the ring menu at the top of this post.

For those readers who are new or catching up, do visit the Salmon Brook Farms YouTube channel. Our first Tiny Farm Concerts one song music video was posted at the end of March, 2017. I am 15 years older and a good bit more grey since my first and only CD was released back in 2003, but still in the saddle. It has been an interesting ride, with more to come!

For those who have missed previous posts and wish to view the channel content, here are links to the previous two videos.  There will be more videos when I can get back to this project.

Developing blackberries, variety “Black Magic”. The changing of the seasons and so many good, healthful things to eat make the end of summer and early autumn my favorite time of year.