Rick and I are two very different musicians, each with our preferred genre, and choice of instruments. Husband and Wife, Farm and Life partners, but not really a musical duo in the traditional sense, we have performed both separately and together over the years. On occasion, I lend my voice in a duet with Rick’s fine picking and singing on a few old folk tunes. In the right venue, our differences in music and style combined with the occasional duet can make an interesting gestalt.  Although Rick has officially retired from music now, you might still see him out and about on rare occasions.

Here you will find the stories behind a couple of our songs. You can find downloadable versions of the songs listed here and more on Getty Images/Pump Audio, as well as iTunes, Spotify and probably a few other places The Orchard has placed our music.  Please visit the links below for more information and music.

NEW: Never know what will show up on the web on a search!  An archive of the old IUMA musicians’ site seems to have some of my music up, at least for now.  You can have a free listen there.  People seem to be finding this site and downloading music now, so have a look at the Lavinia Ross page under Music on this blog site to see a listing of all the songs on the Keepsake CD, including background information on why songs were written, or chosen to cover, including tunings used and guitars.

Other links for Lavinia Ross: 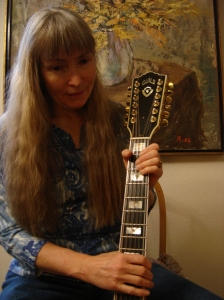 May 5, 2015 show at the MCM Grand. Photo taken from the video with the Linux VLC snapshot function. Photo credit Mike and Liz Santone of Meadowlake Studio and McMinnville Community Media TV.

RICK ROSS – There are a few musicians, and even a cult deprogrammer named Rick Ross out there, which has sometimes caused confusion, even with iTunes management.   Rick Ross the Bluesman, Wine Educator and Farmer got his musical start back in the tail end of the Greenwich Village “folk music scare” days of the 1960s.