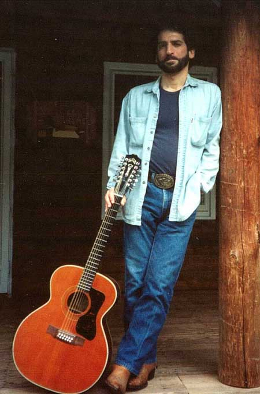 There are a few musicians named Rick Ross out there, which has sometimes caused confusion.   Rick Ross the Bluesman, Wine Educator and Farmer got his musical start back in the tail end of the Greenwich Village “folk music scare” days of the 1960s.  He wrote this catchy country blues tune called “Therapy” some years later, describing why many of us start playing music to begin with.

“Therapy” and other songs are available at The Orchard:

A few anecdotes from Rick’s earlier days:
“My first forays into solo playing were in Greenwich Village, New York, in the 1960s. It was a great place to be for an acoustic musician at that time. There were great musicians on every street corner.”

“I sat in the kitchen at Gurdy’s Folk City and talked with Emmy Lou Harris about her Gibson SJN guitar. It was just like mine, except for the Grover tuning machines on hers. It had never occurred to me to upgrade an instrument on my own. I was 18, she was 21. For one afternoon that summer, I lent that guitar to David Bromberg, who had shown up for a jam session without one.”

“Emmy Lou was opening the main show that night (I was in the open mike preceding the show) for Frank Wakefield & the Greenbriar Boys. Frank’s banjo player that night was 18 year-old Deane ‘Banjo Bucky’ Lewis. Deane had been playing with Wakefield off and on since he was 15, starting on dobro and bass. Two weeks later, he and I formed the New Paltz-based bluegrass band, 21-String Circus. Deane and I have played together intermittently ever since.”

“We (the ’21-String Circus’) spent an afternoon at the home of John Herald, the great session man for Ian & Sylvia and Tom Rush, in Woodstock, NY. We invited ourselves (well, I did), and John was gracious enough to indulge us for an afternoon of picking and singing. I learned flat-picking in great part by listening to his records. We renewed our acquaintance in 2000, and played together on a few occasions before he passed away in July of 2005″

“While in the village, I played regularly for awhile at a coffeehouse called the Four Winds Café. Another regular at that time was Paul Siebel, author of the much-recorded ‘Louise’, covered by Leo Kottke and Bonnie Raitt, among others.”

“Most of those folks are still around and, to think, few of us thought we’d live to be 30!”