Our feature photo this month is from sunrise on December 28th, the morning clouds provided a canvas upon which the longer rays emanating from below the horizon painted in fiery rose.

Sunrise on the 28th, painted on the underside of a bank of clouds. 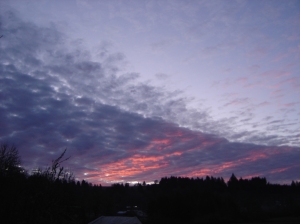 A wider view of sunrise.

The sun rises in the southeast these days, quickly traversing a southerly arc before disappearing in the southwest. Days are short, and often grey and wet, low clouds and mists clinging to hillsides and low areas. Our mornings will continue to get darker for a while, even as the evenings slowly gain daylight, an observation I made as a child having spent much time outside, and many years later was pleased to find is actually a real phenomenon. 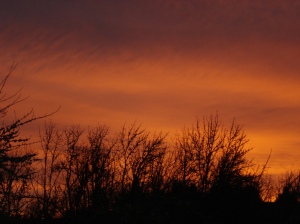 Jack Frost has paid us many visits since October, shutting down the garden except for the hardiest residents, broccoli, kale and brussels sprouts, and the occasional intrepid dandelion which flowers low to the ground in this season. 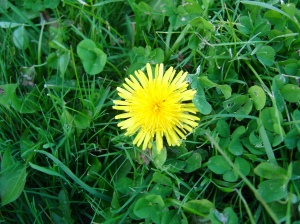 A bright and cheerful dandelion in winter, blooming low to the ground. We will see them in more protected areas all winter long. 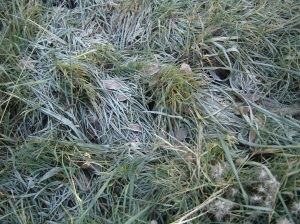 After clear, cold nights where it may drop into the 20s, grass stays frozen in shaded areas that do not see direct sun. This photo was from late afternoon on November 29th.

Mists form, rise, and float away as cloud over the Cascades, although sometimes they settle in, cloaking tree and surrounding hills in a silver-grey shroud.  After night, tendrils of fog writhe and curl under the floodlights with a life of their own, the damp currents of air brushing against my face, and I am aware of a  primordial uneasiness of things that might be in the dark, things unseen under the cover of fog.

Mist covered hills to the southeast on December 13th.

As happens every winter, a spider takes up residence by the thermometer on the porch, conveniently noting the spiders activities as well as the temperature.  I have only seen her out on the web after dark, or in the early blue light of morning.  A shy creature, I have not been able to get a good photo of her to attempt to determine her species.  A small, fat-bodied brown spider, she works in lower temperatures that I would think would discourage most of her kin.   She hides in the space behind the thermometer in bad weather.  After a wind and rainstorm, she will repair her web in preparation for the nightly feast.  I find tiny wings and body parts stuck in her web when she has had a successful hunt.

I lightened this photo using the Gimp editor so that the web would be more visible. 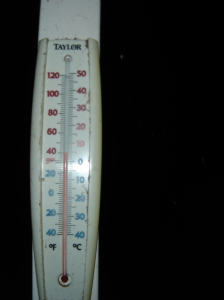 It was 40 degrees on December 23rd when these photos were taken. The small dot off to the right near the top of the thermometer is our spider. Click on any photo in this post to enlarge.

I welcome the winter darkness as a time to rest and recover from the warmer months’ activities about the farm.   It is good time to walk about, and observe the small signs of life everywhere, from fat buds waiting for spring, growing hazelnut catkins, to lichen and moss communities on branch, trunk and rock.  Moss thriving in some areas tells us that the soil is acidic there.  Daffodils are already up several inches by the old garage where it is warmer; their golden trumpets will soon herald spring.   We have past winter solstice, and all is dormant with one eye open, trained on the sun’s slow progress back north. 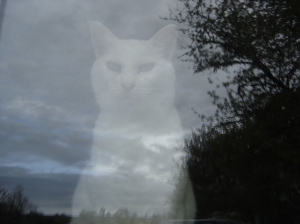 The Feline Correspondents Desk of Salmon Brook Farms has decided to file a brief end-of-year report written by Mr. Nano.  November and December were tough months for the correspondents.  Mr. Lucio had surgery in November to remove four small tumors, which fortunately were benign. There was a suspected brawl at the Correspondents Desk, resulting in Mr. Nano getting a bite at the base of the tail which abscessed, requiring his veterinarian to lance and clean out the wound.  No one is talking, but Correspondent Nod is the prime suspect.

Without further ado, Mr. Nano will present his observations of from November and December 2019.

The slow, steady tread of winter can be heard in the wind, and felt upon the cold, wet ground.  Leaves in shades of brown, red and gold abscise after their duties of turning sunlight into food have completed. Tired and spent, they quietly slip way with the daylight hours, returning to earth and completing the yearly nutrient cycle.  They have been gathered up several times, and placed on the garden beds, along with kitchen compost and manure from the neighbor’s alpacas, adding to the tilth of the soil there.

The moon’s progress is more difficult to track in this time of heavy skies and passing rainstorms, although at full moon, the farm appears somewhat illuminated even under heavy cloud cover.   The soft ghostly glow illuminates yet masks the color of things we know by day, giving the night and its wandering creatures an other-worldly appearance.   At waxing and waning thin crescent stage, the moon’s silhouette gives the appearance of a giant eye trained out into the greater universe, and we know there is something  out there, greater than ourselves.  These are the cyclical things we know will continue happen long after we are gone from this world.

The foxes are still about, and can be seen and heard in the night.  Four were counted earlier this year.  By morning, they have left copious scat on  the gravel drive, rocks or other objects, calling cards of their visits.  Gophers, mice, moles and voles still tunnel about the farm in this weather, kept in check by the foxes and other predators.   We have heard an occasional tree frog, but not the early winter chorus we have had some years.  The winter rain pools are forming in the low areas, and we will soon hear their song, indicating all is proceeding as it should.

As always, we wish our readers a pleasant evening ahead, and safe travels to wherever their destination in life may lead them.

View from the plane coming into LAX in January of 2018.

For those readers who missed previous posts or are new to this blog, I will be posting on mostly seasonal basis now. Hopefully someday, I may be able to actually catch up on the many projects, including updating the pages associated with this blog, as well as stay in touch with all of you. I will keep the performance schedule updated regularly. New videos will follow as soon as I can get to it. I have my new used computer now, specifically for video and music, a gift from friends and a serious nudge from them to get moving on this project.   I have loaded it with Lubuntu Linux, and am in the process of learning the tools, amid all the other activities that occupy my days.  There was not enough time to get a new music video out with this end of year post. 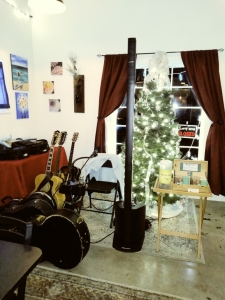 Setting up to play by the Christmas tree at D’Anu. I saw old friends and made new ones, too.

If you are in the area and wish to see me play live, please visit the Performance Schedule page in the ring menu at the top of this post.

Mural from The Drift Inn over on the coast, one of my favorite places. The restaurant interior displays beautiful murals of all kinds of exuberant sea life.

Rick will be making a guest appearance with a couple of songs at the end of some of my more local shows in 2020.  He had given up playing for some years now, but has taken an interest again.  His music is also available through The Orchard as well as Getty Images.

Rick Ross the Bluesman, in his younger days back in Connecticut. Photo credit C.M.

For those readers who are new or catching up, do visit the Salmon Brook Farms YouTube channel. Our first Tiny Farm Concerts one song music video was posted at the end of March, 2017.   I am 16 years older and a good bit more grey since my first and only CD was released back in 2003, but still in the saddle. It has been an interesting ride, with more to come!  I am now almost sold out of CDs and must get to work on the new one.

This may be the cover of the next CD. This was my pet rooster, Mr. Pluff. I was teaching him how to sing.

We have enjoyed playing out in both new and familiar places this year.

A view of the bridge over the Siuslaw River, seen from below, Florence, Oregon.

A view of Bay Street and River Roasters, Florence, Oregon.

A lone seagull that day, on his post in the Siuslaw River. He gave us a good look. 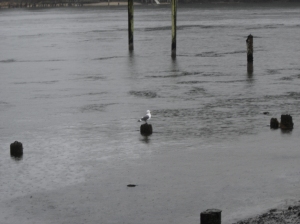 And then decided we were not a threat. He continued his vigil.

For those who have missed previous posts and wish to view the channel content, here are links to the previous two videos. There will be more videos available before the end of March post.  I have been playing out far more this year, which by necessity slows down progress in other areas.

If you have read this far, please note we will post again at the end of March in 2020.   In the meantime, please visit our other pages in the menu at the top of this post

The sun low in the sky, almost sunset, on Christmas day.